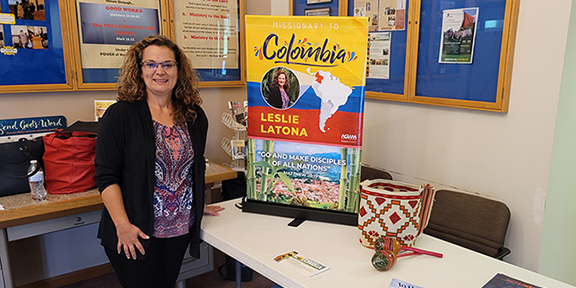 Leslie serves in Colombia where she teaches English and cultural awareness to Bible school students who have been called to be missionaries. She presents workshops to Sunday School teachers and other children’s workers, helps to plant churches in various towns, works with children’s ministries in these new locations, and preaches and teaches the Word of God to children and youth. She is currently working with the church in Simón Bolívar to start a foundation for children at risk.

Leslie taught English to Bible school students who were preparing to go and serve as missionaries. She traveled to many churches and presented training workshops to children’s workers on how to teach the Great Commission to children. She spoke at camp retreats for children and adults, and she shared the gospel message in public schools and participated in many evangelistic outreaches for children. She also hosted ministry teams from churches in the U.S., taught missionary kids, and worked with youth in puppetry, drama, and other creative arts. 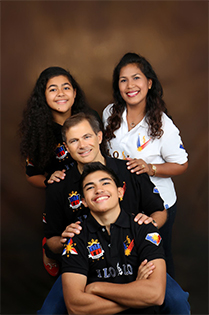 Rev Paul Barner, ministry is mostly in communication, planning, organization, prayer and training. Elvis does most of the hands-on work of administration and interaction. Evangelism and youth work is done by the nationals whom they have trained, since they do it best.

The Barner Christian Academy International Student Sponsorship Program is an opportunity for Filipino children who otherwise might not be able to afford a quality Christian education. $30/month will change the life of a special child. Please pray as to what you might be able to do in regards to sponsoring a child and click on the Web Site link below to help.

After spending 25 years as an accountant, God had called Joe to full time missions work in Italy at the age of 49.  At the time he and his wife did not know what 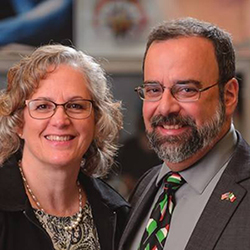 specifically that meant.  So – as they prepared to go – they did a total of five short-term trips to various parts of Italy, each ranging from two weeks to one month long. They worked with the established missionaries there and developed a relationship with them and with the national church.

It was during these trips that they became aware of the incredible need down in Sicily. They discovered that, for the past five years or so, Sicily was the largest induction center for African and Middle Eastern refugees in Europe. They averaged about 170,000 refugees each year during that time, and there are at least eight unreached people groups represented in these refugees. Unfortunately, there is a large segment of these refugees that will most likely stay in Sicily indefinitely, as they are running out of places to send them. They live in very modest, cramped housing and eat the same food day after day. Although they are safe, fed, and have a roof over their heads, it’s not an ideal situation for them.

The Assemblies of God does not have an English-speaking church anywhere on the island to reach these people.  Many of these refugees are English speakers but there is very little evangelism occurring because of the lack of English speakers. After much prayer, the Benecasas believe that God has put it on their hearts to establish an English-speaking church just near the refugee centers that will reach out and evangelize these desperate people. Besides the refugees, there are now a large number of English-speaking Internationals working there, as well as a U.S. military base close by. Their plan is to reach all these different segments of the population, along with as many Italians as they can reach!

Their goal is to evangelize and disciple, and they are believing God will raise up their replacement – a local man or woman who will hear the call to pastor their newly established church. They will train him or her and help them get the education they need to become credentialed. Then, once the church is self-sustaining, Joe and Mary will move on to plant another church wherever God leads them.